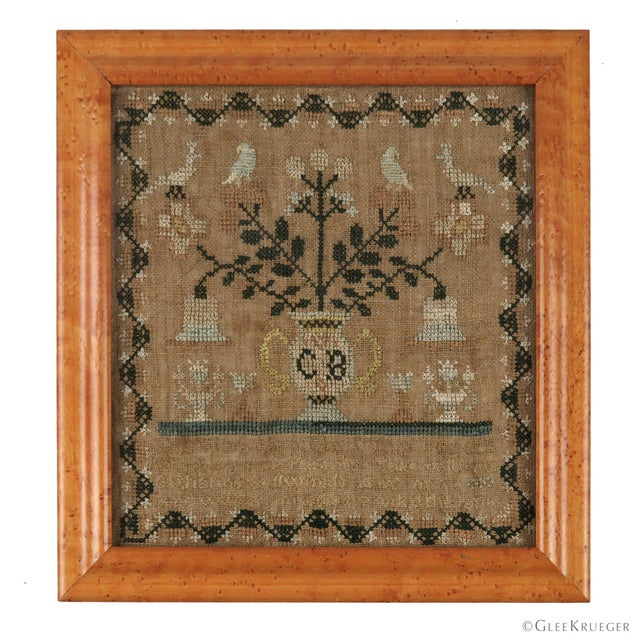 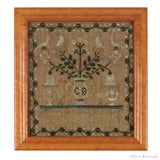 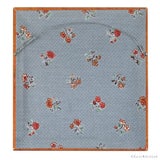 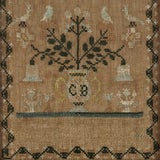 Silk on linen sampler worked by Catharine Bullwinkle about 1815. Four birds resting on flowers extending from a vase / urn / planter, surrounded by smaller baskets with flowers. With small berry border. The dark thread is a beautiful deep forest green.Part of Glee's collection for 50 years!

This Work I have done To let You See

What care my Parents Take with me.

Catharine Bullwinkle is my name

And with my needs I workd the same.

Details are hard to find of Catharine. The following is further background about her father.

Henry Bullwinkle (16 Feb 1774 - 6 Dec 1841) s. of Johann Bullwinkle (2 Feb 1726 -  ) and Trine Flathman (1734 -  ) was born in Axstedt, Hanover, Preussen (near Bremen, Germany). Prior to Henry's emigration to the U.S., he lived for some time in London. By trade he was a sugar maker. During that time in London, he befriended William Havemeyer, who was an apprentice of a London sugar refiner. In 1799, William Havemeyer, was hired by Edmund Seaman to manage his sugar refinery in New York City. William's brother, Frederick Havemeyer, joined him in 1802. In 1807, the brothers opened their own sugar refining business called W. & F.C. Havemeyer Company on Vandam Street.

At the turn of the 19th c., after Henry's arrival in New York, he worked at the Seaman sugar refinery with the Havemeyer brothers. He settled in the city on Orchard St. Later he pursued a career as a real estate developer. He owned properties on Third and Orchard streets, buying lots and building houses.

No stitch loss. Some mild spotting around left side of flowerstems. Conservation prepared by Glee. Mounted on cotton ground case over archival board. Birdseye maple frame by Ralph.