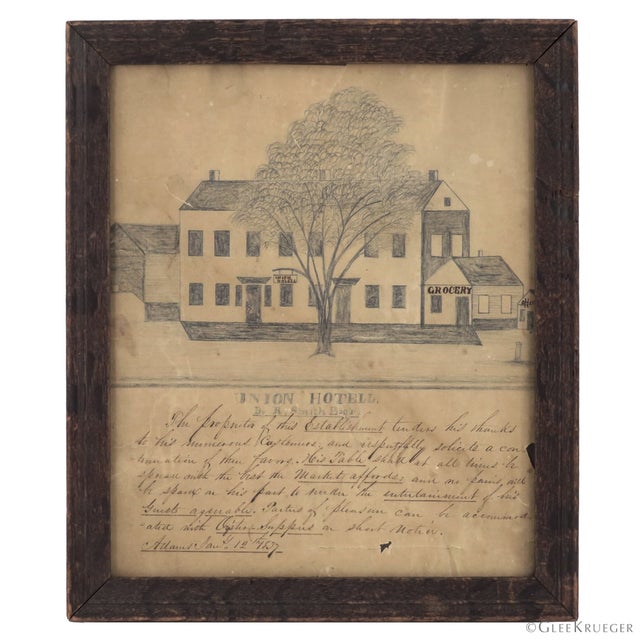 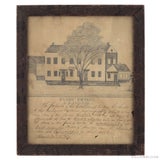 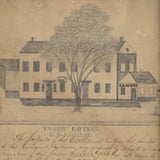 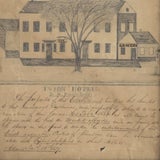 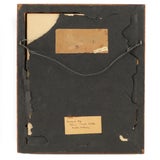 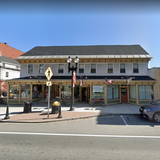 1837 pencil sketch done by Charles Brown Wells for R. Smith Esqr, for a contract for the Union Hotel in Adams, MA.

“Union Hotel / by R. Smith Esqr. / The proprietor of this establishment tenders his thanks / to his numerous Customers: and respectfully a con / tinuation of their farms. His Table shall at all times be / spread with the best the Market affords and no pains will / be spared on his part to render the entertainment of his / Guests agreeable. Parties of pleasure can be accommod / ated with ____ Supplies on short notice. Adams, Jan 12th 1837”

“In the early history of Adams, Park Street was the stagecoach route through town. By the 1840's, the street was occupied by the houses of crafts- and tradesmen.” .

The Union Hotel: This building is the oldest on Park Street. It was the second hotel to be built in Adams in the 1820's. It has gone through many changes, including being lowered 18 inches when the building was fitted up for store fronts in the mid 1880's. .

1814: The beginning of the textile production in Adams began with the establishment of the Adams South Village Cotton and Woolen Manufacturing Co. The mill was located on what is now Commercial Street. Other small mills began operating along the Hoosac River and smaller streams which flowed down the hills. Bales of cotton were shipped to Adams from the South to the port of Troy, New York and then brought over the mountains by oxcart. The finished products usually left Adams by the same route.