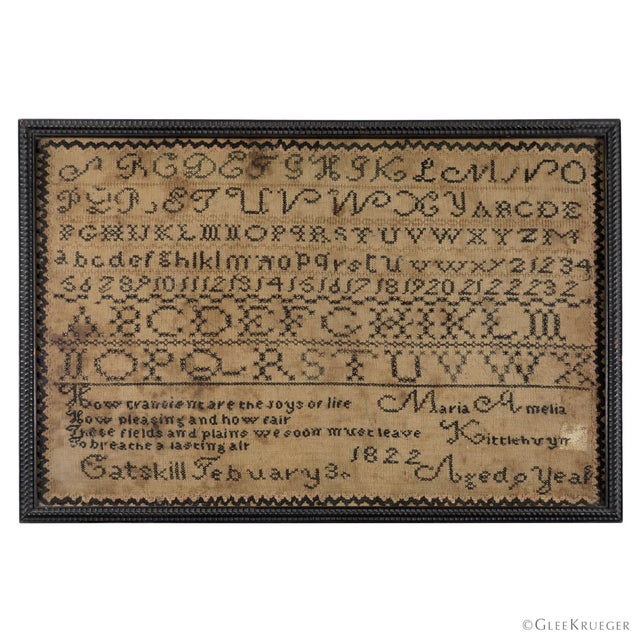 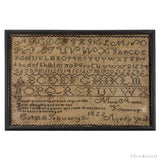 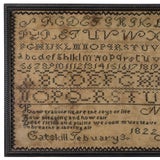 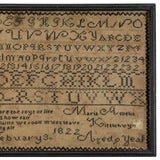 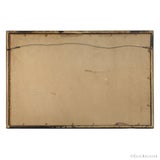 The Kittle Huyns were early settlers of Schaghticoke, Rensselaer County, NY. David Kittlehuyn was born on 30 Aug 1778 at Schaghticoke to Willem Ketel and Annake Toll. He was appointed lieutenant of the second squadron of the third division of the Rensselaer County cavalry commanded by Captain Knickerbacker. At age 34, David married Amelia Lester on 20 Jan 1812. They had three daughters: Maria Amelia, Julia Frances, Ann Elizabeth.

This sampler is attributed to Emma Willard's Troy Female Seminary. The Kittlehuyns are listed as living in Troy in the 1830 census.

Worked in silk on linen, its verse reads: "How transient are the joys of life / How pleasing and how fair / These fields and plains we soon must leave / To breathe a lasting air" - Catskill Febuary 3 1822 / Maria Amelia / Kittlehuyn / Aged 9 Years

"Most of Northern and Western New York were the grounds of the War of 1812, and militia and regular army forces were led by Stephen Van Rensselaer of Troy. Quartermaster supplies were shipped through Troy. Through much of the 19th and into the early 20th century, Troy was not only one of the most prosperous cities in New York State, but one of the most prosperous cities in the entire country." (source: wikipedia)