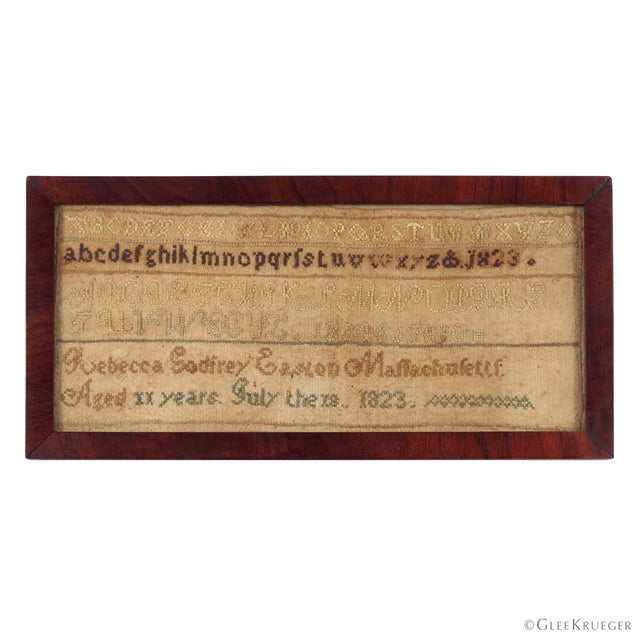 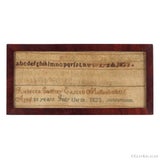 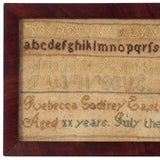 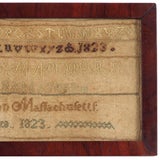 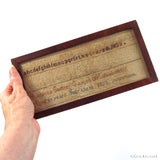 Rebecca Godfrey's simple marking sampler was worked in silk and cotton on a linen ground in four colors. One row uppercase, one row lowercase, and one row of cursive uppercase with numerals.

"Early Easton must have been a rather rough and tumble sort of place. Easton’s citizenry, as well as its resources, steadfastly supported the Revolutionary War, and much was done to assist freedom. Cannons for George Washington’s army were cast at Perry’s Furnace, and muskets were made at Quaker Leonard’s Forge on East Elm Street. It was at this forge that some of the earliest steel produced in America was made. Even today, charcoal “pits” (rings in the ground) exist throughout the town as physical evidence.

The early nineteenth century saw a man move to Easton who would change the entire town’s character. This was Oliver Ames, maker of some of the earliest iron shovels in America. Oliver Ames set up a shovel business that prospered to such an extent that by the end of the century it was the largest in the world. The Ames family directly influenced the growth of North Easton, and due to the different character of the areas of the town, it separated into factions that only recently think of themselves as one town."

No ground loss. Some stitch loss and bleeding. Not conservation mounted. In period frame as acquired by Glee.