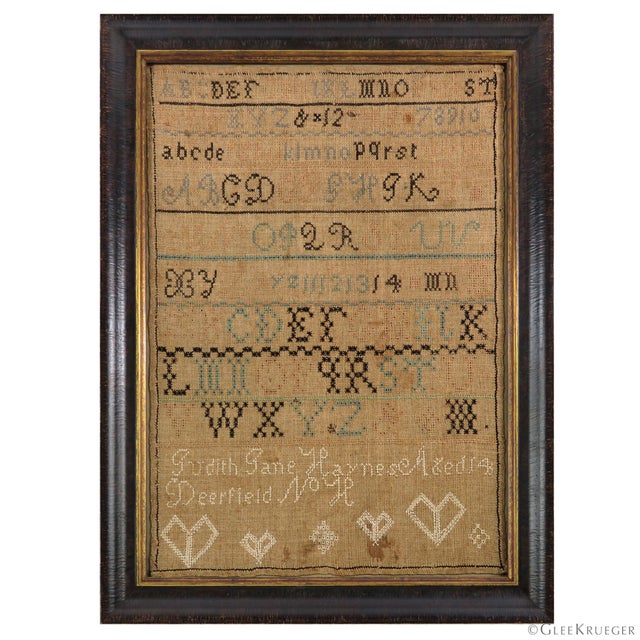 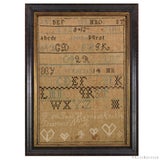 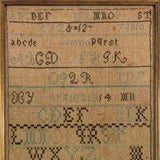 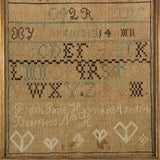 Judith Jane Haynes' worked this charming sampler in 1832 at the age of 14. Silk on linen, it is worked in 5 thread colors of cross and eyelet stitches. 4 full alphabets: 3 uppercase and one lowercase.

"Judith Jane Haynes stitched her marking sampler in Deerfield, New Hampshire. Judith included the letter “J” on her sampler, although not in every alphabet, and once she stitched it backward. The letter J often does not appear on 18th century samplers so perhaps that is a clue that Judith did her work in the 19th century. Another hint is that Judith included her middle name. Middle names were less common in the 18th century but became very popular in the early 19th century. Her final clue is that she spelled her last name with a “Y”. The Haines surname, spelled in a variety of ways, was common in Deerfield in the early 19th century. The Haines were early settlers of the region.

On February 21, 1848, Judith married Samuel G. Haines, who was the son of Samuel Haines, The couple remained in Deerfield, where Samuel was a farmer. By 1870, they seemed to have suffered a severe financial loss, no longer owning a home, and with their personal property seriously diminished in value. They were parents to a son and a daughter. Judith died in Deerfield in June of 1888." ~ Leslie Rounds, Saco Museum

The Haines are descendants of the first settlers of Deerfield, NH. Samuel was the son of Samuel Haines (20 Feb 1789 - 19 Apr 1860) and Mary Philbrick (6 Apr 1819 - 26 Jul 1863). He and Judith resided on the farm that had belonged to his father. Samuel was a captain in the 18th Regiment NH Militia, and was justice of the peace from 1860 onwards. On his mother's side, he is the 7th generation descendant of John Philbrick, one of the first settlers of Hampton.

Some stitch loss in first row. Period mend near capital Z on final alphabet row. Fading to thread and spotting at bottom. Conservation mounted and prepared in contemporary frame.