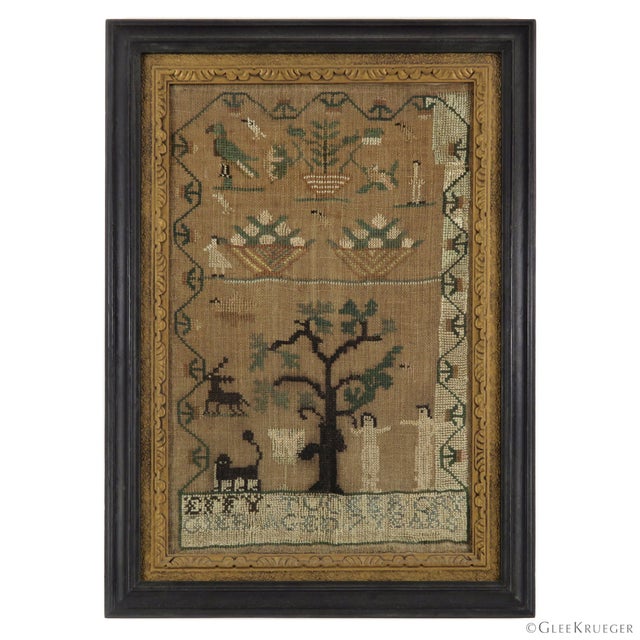 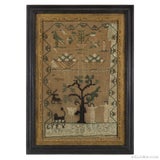 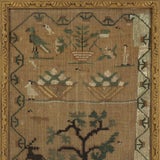 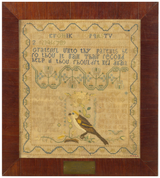 Effy Tucker Crygier was 7 years old when she worked her Adam & Eve sampler in 1803. Effy was born Feb 19, 1796 in New York City, to Cornelius Crygier and Hannah Parker. Her family were active members of the Dutch Reformed Church, where she was baptized Apr 4, 1796. The 2nd of 4 children born to Cornelius and Hannah, Effy was raised in New York City.

Her father, Cornelius Crygier, was an upholsterer and carpenter. He served as vice president of the General Society of Mechanics and Tradesmen of NYC from 1797-1800. As a younger man he had served in the Revolutionary War as a "wagon conductor".

An ambitious effort for a 7-year old child, the charm of Effy's sampler comes thru in the rendering of the figures and the dog. Adam and Eve being expelled from Eden to the far right. The snake wrapped around the trunk of the apple tree, surrounded by a stag, dog, birds, and figures. Captioned at the bottom, "EFFY • TUCKER • CRY / GIER AGED 7 YEARS", it is worked in 9 colors of silk thread on a linen ground, with bowls of fruit, basket, and a botanical border.