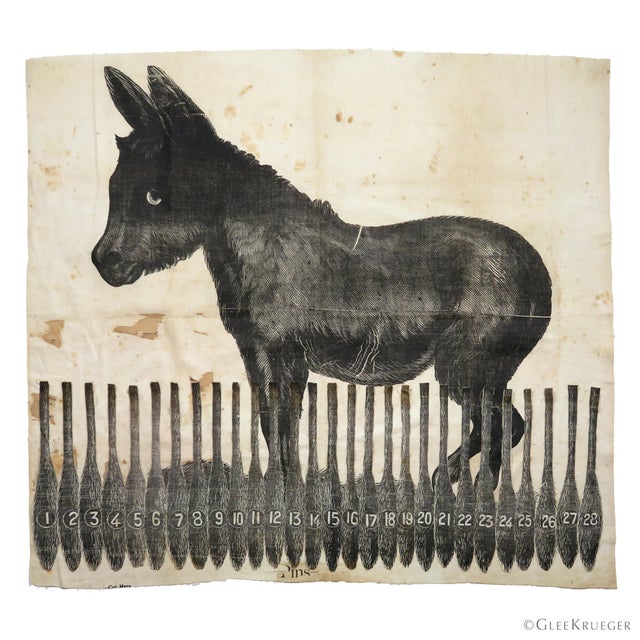 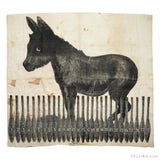 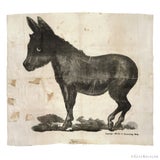 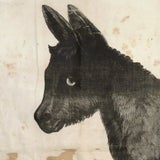 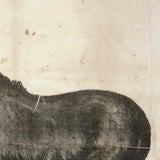 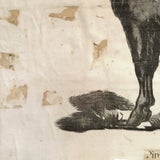 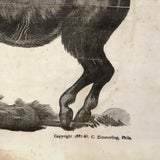 In 1887, Charles Zimmerling of Philadelphia designed and patented the first Donkey Party game. Printed on cotton, each numbered tail would be cut out by hand by the players.

This version is the FIRST edition of Zimmerling's two designs that he manufactured between 1887 - 1889. Original title on bottom was "Pin-For-Tails".

By 1888, other manufacturers began printing the game on paper.

HISTORY of Pin the Tail on the Donkey from THE VICTORIAN HISTORIAN:

Pin the Tail on the Donkey is one of the most well-known children’s party games. But did it start out as a game for children? The origins of Pin the Tail on the Donkey are not exactly known but it is believed to have begun in Milwaukee in 1886 shortly before becoming a popular form of entertainment within elite social circles in Washington DC and New York City late that year. At the time, parties involving this game were known as a “Donkey Party”.

“Donkey parties are the latest thing in the way of a social gathering in Milwaukee. A large silhouette representing a tailless donkey is cut out of paper or cloth and fastened upon the wall. To each of the guests are given a cambric tail and a pin. Then they are blindfolded, one by one, placed in a corner opposite the donkey, are whirled three times around, and then started on a blind search for the donkey, upon which, if they reach it, the tail is to be pinned. If the guest goes in another direction and stumbles against a wall, door, chair, or anything else, there he must leave the tail. The movements of the blindfolded are apt to be ludicrous. The person who makes the best effort to place the tail upon the donkey where it belongs receives a present of some kind, while the guest who makes the most unsuccessful effort gets the booby prize.”

With newspapers around the country reporting on the popularity of donkey parties, the Donkey Party craze was about to begin as the year 1887 rolled in.

Politicians of the Democratic Party, whose mascot was, and still is, a donkey, began considering holding donkey parties at the Capitol.

Such a consideration was reported on by the editor of The Sedalia Weekly Bazoo, a Missouri newspaper:

“The very latest social wrinkle that is convulsing capitol society, is the ‘Donkey parties’. Everybody, that is anybody, is trying that dexterous feat of ‘tailing the donkey’. Unless one has tried that adroit deed, you have no conception how much mental and physical strain is required. I have seen grave dignitaries and wily Representatives waltz confidently up to the donkey and miss him by ten feet. Senator Jacobs came very near attaching the caudal appendage to the neck, and Speaker pro tem Russell left the rear attachment on the off hoof. Senator Gears, the jolliest man in the senate, is contemplating giving a “Donkey party” in the basement of the capitol, to “donkeys” only of the two foot tribe, and demonstrate practically that no blinded man can successfully accomplish the act in one trial only.”

Those throughout the country who could not normally afford the entertainment that elite social classes and politicians enjoyed were now able to take part in one of their activities, pinning a paper tail on an image of a donkey. Up until this time, the donkeys and tails were hand-drawn by players (a secondary contest to the game awarded a prize to the player who could draw the best donkey to be cut out and used for gameplay).

Game companies manufactured different images of the donkey, two of which appear below in the first and second photos, along with instructions. Ads for the game, like the one in the fourth photo, appeared in magazines nationwide.

The game was still strongly advertised in 1888, not just by game companies but by paper product companies as well. As one paper company advertised that year:

“Donkey parties are going to be still more numerous during the coming season, and besides the usual participants will require the faithful representation of Asinus and, what is equally important, an unlimited supply of tails. Many crude and ill formed resemblances of the donkey have been made to serve the purpose of having some fun. It is much better to procure a properly drawn donkey and all of his needed appendages. The inventor of this game is C. Zimmerling, of Philadelphia, and he has published a sheet on which the donkey and numerous tails are depicted. All that is necessary is to cut out the figures and they are then ready for use, following out the printed directions which the manufacturer supplies. This game is a very enjoyable indoor pastime, and for a jolly company is one of the best things desired for a winter evening’s amusement.”

Over time, the game slowly faded in popularity as entertainment for adults and instead became a game for children. It appears the game’s name changed during the late 1950s/early 1960s from variations of “Donkey Party” or “Tailless Donkey” to “Pin the Tail on the Donkey”, which, over 130 years later, is still one of the most popular childrens’ party games.