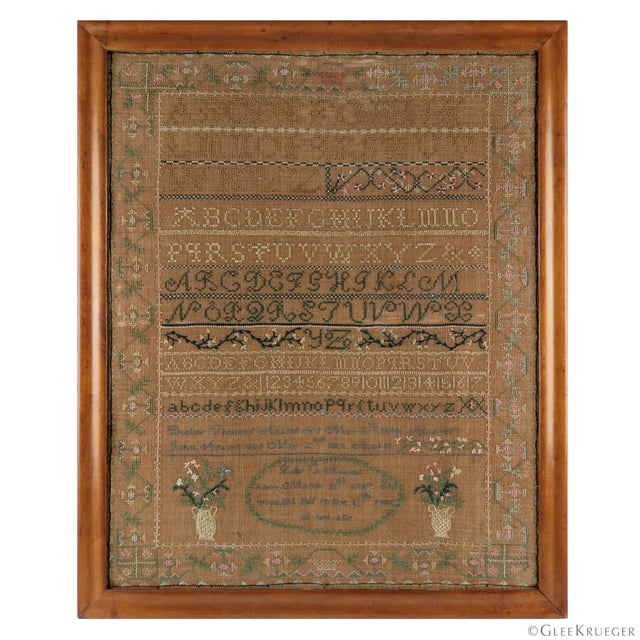 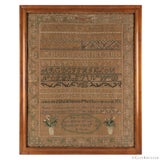 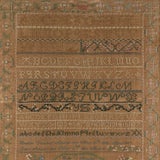 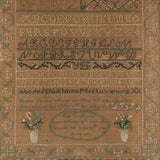 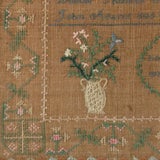 "Polly Cochran Adams stitched her attractive sampler in memory of her father, Dr. Thomas Adams who had died just the year before, and her older brother, John, who died at the age of thirteen when she was just four years old. Her mother, Sarah Fillebron Tufts was from Lincoln, Massachusetts and her father from Ipswich, Massachusetts. Some of her six older siblings were probably born before the family’s arrival in New Hampshire. Polly was born March 21, 1797 in Pembroke. The reason for her middle name, Cochran, is uncertain, although there were numerous Cochrans in Pembroke at the time of her birth. Polly seems very likely to be the Polly C. Adams who became the second wife of John Cleaveland Cogswell, and died childless. His parents were from Ipswich, but had relocated to Derry, NH sometime after his birth in 1793. That Polly died June 3, 1836 and is buried with John Cogswell, his equally short-lived first and third wives, his brother, and one of his children in Boscawen, New Hampshire. The Pembroke Academy was not founded until 1818 so was not the source for Polly’s sampler." ~ Leslie Rounds, Saco Museum

Staining to left side, with foxing around cartouche. Some bleeding, and color loss to thread. Original period gilt frame has surface wear and mild loss to gesso at corners.