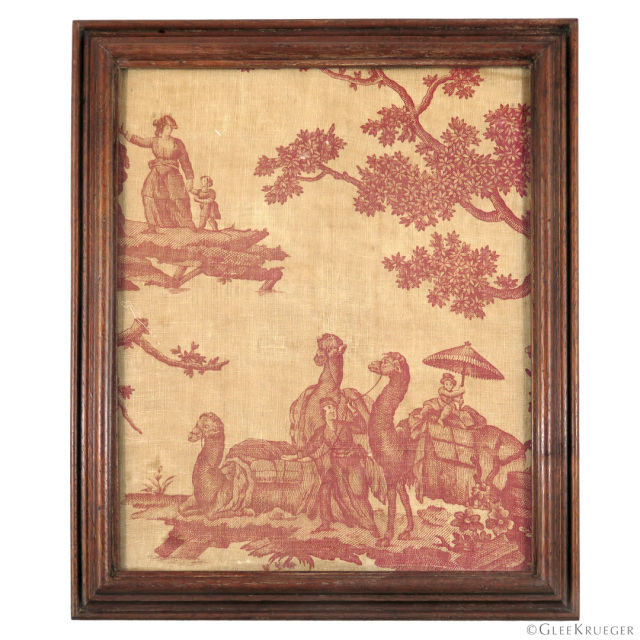 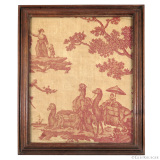 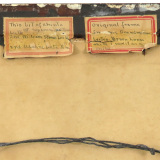 Unique fine copperplate printed French red and white scenic landscape of figures with camels. This framed swatch of toile was a treasured belonging in the Leete family for at least 3 generations, with the listed generations on the reverse. Rev. Charles Ward Leete is a descendant of William Leete, one of the 17th c. founders of Guilford, CT.

During the second quarter of the 19th century, “fancy chairs” were very popular for American parlors and dining rooms. During this time, a young Charles Ward Leete, opened a chair factory in the area of Verona, NY. This fabric swatch may have been a sample from his business and a source of pride in his accomplishments.

Rev. Charles Ward Leete attended public schools in Guilford and Verona, and was a seminary student between 1815 - 1820. He was a student of Fairfield Seminary in 1820. “During his minority he was employed mostly on the homestead farm at Verona; later he established a chair factory in that town, which he operated for several years.” He received his ministry license in Mar 1831. He was appointed assistant pastor at Steuben, NY in the fall of 1833. A year later he became pastor at Antwerp, NY. He served several ministerial positions following that in Fullerville, Canton, Potsdam, Fulton, Weedsport, Little Falls, Adams, and Vernon.

VERY GOOD. No holes or damage. Not conservation mounted. In original family frame.